Following the unexpectedly great success of XY's first issue, independent galleries in Olomouc joined again in 2016 for the second issue of the unique “XY – art walk with exhibition openings”.

The sequence of exhibition openings, performances, concerts and other surprise events took place on April 28 2016. Documentation.

XY 2016 was focused on the Ostrava art scene. 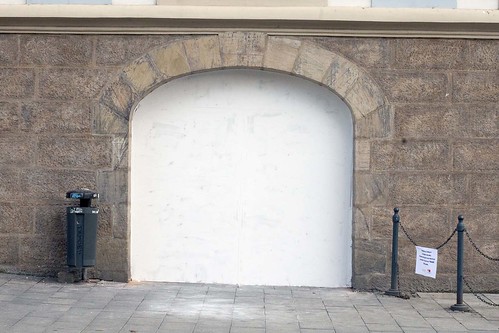 Šlégl Josef (b. 1981) is a qualified electrician and graduate from sculpture, the Faculty of Arts, University of Ostrava. Within his objects he works with stories of things and offers a different view of them. He collects, composes, transforms, recycles and puts anything into operation. Hot debate is about the artistic contemplation of what is actually displayed behind the curtain of the depicted reality. The work is still in the process of creation and the author himself is waiting for “what this is eventually going to be about.”

Matěj Frank (b. 1989) is a visual artist and experimental musician, who alternatively lives and works in the Czech Republic and Poland. He works with space – using linkages to time, motion and body. He ranges across media and explores boundaries between image and sound. He is interested in layering information and the resulting illegibility. The installation Places, intended for HROB, layers, mixes and relativizes space of cemeteries and graves that are directly connected to the author’s family history, his travels, stays and experience.

The place where Lomená Gallery is based used to be a mere part of a mass of house which was later smashed through and free space got the function of a passage. Petr Švolba & Martin Kubica from the Faculty of Arts, University of Ostrava, follow the historical reality of that place and symbolically give the mass back. Closing down the passage will result in the radical change of situation of this part of the street. The space of gallery will be freed from the “smog” of street art, then it will be conserved and for a short period of time it will be left at the mercy of its “sterile” cleanliness. During the exhibition opening the space will be symbolically reopened by smashing down the walls; therefore fragments, which refer to the memory of the place and realization of the space character, originate.

Jakub Adamec and Pavel Pernický have been forming an artistic tandem I Love 69 Popgejů for 15 years already. During their mostly musical creation they made several earthy artistic videos that are typical of their ambivalent meanings, absurd motives and chaotic narratives. In the restored Monitor Gallery they present themselves not only by means of their common videos, but also as individuals – they are going to introduce Adamec’s self-reflexive videos parodying conventions of documentary film and classical cinematography, as well as frenetic computer animations made by Pernický’s alter ego Marius Konvoj.

Edgar Schwarz captures moments and still-lives representing any value of meaning for him. Then he works with them in form of visual diary. In the Hidden Gallery, Olomouc, the photographs of, as he himself states, “visions and mental landscapes” will be on display. Their style is inspired by darkness of Schwarzprior and Woltrap bands, an inseparable part of which Edgar is. The exhibition opening will start with a performance.

Marius Konvoj, the authorial project of Pavel Pernický and Tereza Krainová, the graduates from Petr Lysáček’s Studio of Intermedia, Faculty of Arts, University of Ostrava, originated, according to their own words, from a garbage can, from a chaos of deep-rooted social schemes, politics of consume, media infatuation and the existing establishment. Their artistic creation, which masterfully ranges from traditional visual media to new technologies, manifests its own formula of life and transformation into another man with special abilities. An urgent call for love, inner freedom and man’s ability to manifest his/her own existence here and now is echoed beyond the layers of visual memory, uncompromising aesthetics and straightforward statements: everything is the one and it contains everything – resistance continues! Exhibition 28 April – 15 May 2016

Jiří Sedlák (b. 1985), currently the student of the 5th year of Josef Daněk’s Studio, Faculty of Arts, University of Ostrava, has been in the long term dealing with theme of landscape and experiencing it. In his paintings he has been searching for a powerful moment – the reality that he is moved by. He struggles to interconnect memories of landscape and its records. The cycle presented in W7 Gallery is, for the most part, also his master thesis. In canvases of various formats he captures landscape in its essence; he is attracted by the place, by the world reflecting in the mirror of the water level, by the movements and rhythms taking place in the nature. He is fascinated by deep waters of memories and certain personal experience. Together with him the visitors find themselves in the time before awakening. Exhibition 28 April – 22 May 2016

The Studio Fine Art-Video-Multimedia-Performance is not limited by this intermedia range, however, has universal ambitions. It starts from scratch – from drawing and painting – continues with installation and object, performance, video, parallel computer collage; after all a computer plays all roles here including a pedestal for a snack. What is determinant is a student and his/her relation to this medium. Sometimes the relation is positive, sometimes not so much, but all of them have any. Well, new age, new media… Therefore both videos that represent only a small episode in someone’s life and videos that represent the lifelong story of the others originate… You will be able to see both attitudes. Ranging from Martin Froulík’s explicitly pornographic video to the sophisticated double-projection of seven-year-old, but nowadays very up-to-date again, Barbora Tichá’s persiflage in a turban with red face… Well, the span was suggested and there is nothing more than to state that the worst from J. S. Studio will be probably the master himself, in the role of guide to film mug of his rigorously selected nerds he loves… 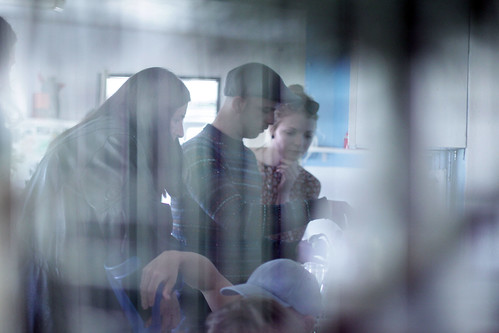