This autumn, PLAIN‘s authors have cooperated, in the context of the development and preparation of a project based on the decentralisation of the viewer´s perception of sound and image, on the implementation of the site specific AV performance Light Curtain for the Norwegian festival ScreenCity. Instead of an installation solution which uses lighting and a quadraphonic sound system to fill the whole presentation space, which is typical for PLAIN, the authors used a different method for Light Curtain. It was a model situation of an image projected onto a ‚treated screen‘ divided into a grid of twenty vertical strips, with the sound consisting of a sampled and live organ operated via MIDI controller.

PLAIN is, according to its authors, an electroacoustic spatial landscape created in real time. The viewer becomes a part of the scene, which can be actively perceived from different perspectives. Therefore, the experience is individual for each viewer. The image is created by minimalistic and abstract elements. The emphasis is put on working with light in space and experimenting with peripheral perception. The sound composition consists of fragments, unconventional acoustic material and sampling, which creates ambient and rhythmical sequences in contrast with the raw digital sounds. Image and sound, the cornerstones of the arising landscape, take up various relative positions in time. They range from harmonic mingling to the creation of opposing polarities. 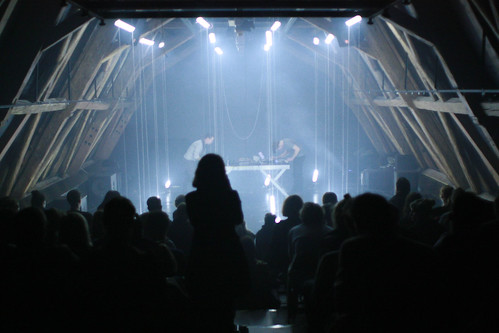