Janek Rous is the winner of Other Visions 2015

The winner of the Other Visions 2015 competition is Janek Rous with his work The Sound from the Desert. He was awarded the main prize by the international jury, consisting of Samson Kambalu, Jonathan Monaghan, Daniela Arriado and Gabriel Florenz. The Special Jury Prize was given to Petra Lelláková and Vladimíra Večeřová for their video Marmotour. The Audience Award was won by Aleš Čermák and Michal Cáb for their video The Earth Trembles.

The awards for the unique competition of the contemporary Czech moving image, Other Visions, were presented on Sunday December 6th 2015 as part of the closing ceremony of the 14th PAF–Festival of Film Animation Olomouc..

“This impressive selection of Czech moving images has a finger on the pulse of the important questions that circulate within contemporary society. The artists criticize, with a fitting view, the technologies, unsuccessful utopias and the chaos linked to modern reality.

The jury chose works which succesfully react to these phenomena on the levels of social, physical and cinematographic contexts and develop the curator’s intention. Because of these and other reasons we have given the Main Prize to Janek Rous for his work The Sound of the Desert. We appreciate Janek’s approach to his work with the medium and his ability to articulate an interesting and impressive narrative.

We have given the Special jury prize to Petra Lelláková and Vladimíra Večeřová for their video Marmotour. The jury acknowledged their way of interpreting the environment through a captivating site-specific choreoraphy,” said the jury about their decision.

Festival director Alexandr Jančík at the closing ceremony of PAF 2015

The final ten were selected by the guest curator and film theoretician Lenka Střeláková, from one hundred and ten submitted works. Her efforts in providing the public with authentic accessibility to the finalists’ works resulted in the spectacular exhibition Differentiated Visions in the Atrium of Konvikt in Olomouc, which was an important milestone in the history of the festival.

“During the selection of the finalists I was concerned that the character of the whole didn’t just remain on the level of news, thus being an exclusive 'top ten.' The Other Visions block also represents an interlinked whole, where individual works communicate with one another, they create a specific narrative line and basically they create a feature film, which however also works in a loop,” said Střeláková about her concept.

The competition Other Visions has the goal of mapping the latest happenings in the field of the moving image in the Czech Republic. It focuses on those forms which are on the boundary of animation, experimental film and videoart. Every year’s selection is unique thanks to the different interests of the curators who select the ten nominated works.

Over the next year the selection of competition videos will be presented by PAF abroad and in the Czech Republic under the name Other Visions 2015. The competition Other Visions will celebrate its 10th anniversary next year in December during the 15th PAF–Festival of Film Animation Olomouc. 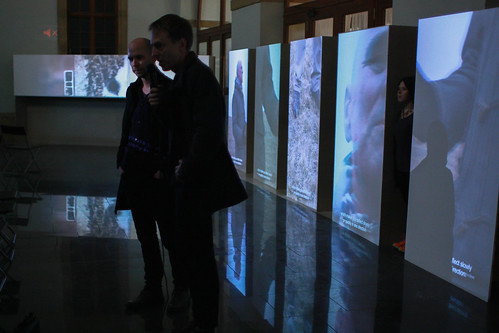