Dan Gregor, an artist from Prague, carries out his audio visual projects under the pseudonym Initi. He is also the head of the international platform which carries the same name. The platform unites artists, musicians and designers who participate in technologically demanding performances in public space. Interactive site-specific projects based on the symbiosis of visual and audio elements are in the main focus.

The essence of the audio visual installations is the transformation of a real space into an illusory space of virtual reality by the means of exact calculations and architectonic ground plans. The emphasis is also put on the history of the places which often becomes the main inspiration for creating new visual contents. The interiors then often urge interactive clashes with spectators or performers who then become the creators of light paths and sound landscapes within real time tracking processes.

Within the programme of the Screen City Festival, Initi gives his attention to the new building of Stavanger Konzerthaus. He strives for organic interconnection of outer extensive façade with the following glazed part of the space-generous building. Video mapping features are manifested in the combination of light effects pervading the specially created smoke-screen. 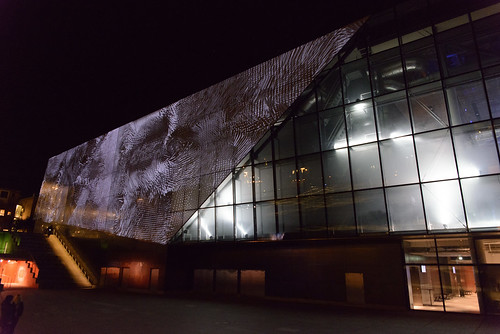