On Monday, 10th October, in the baroque Corpus Christi Chapel in Konvikt there was a concert by the New York-based musician and performer Ziemba, who introduced her debut album Hope Is Never. The event was organized by PAF and KVV.

Ziemba is the stage name of a sound artist, performer, musician and a dancer from Brooklyn called René Kladzyk. In her creations, she is trying to discover the “co-creating properties” of bodies and spaces through sound, movement and energetic echo. She is currently touring Europe to promote the release of her debut album Hope Is Never.

PAF has been in collaboration with Ziemba since November 2015, when she introduced her performance at PAF New York 2015. 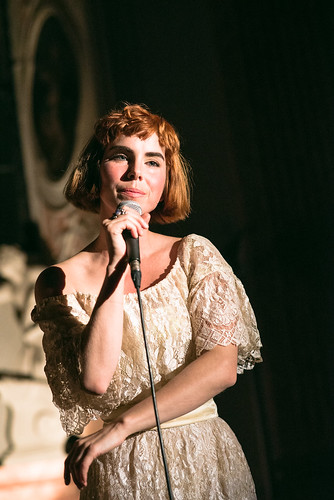 The concert was supported by the specific research “Artistic creation of students of Department of art studies PdF UP Olomouc” IGA_PdF_2016_023. Organised by KVV UPOL and PAF Olomouc.

Ziemba is the stage name of a sound artist, performer, musician and a dancer from Brooklyn called