The 14th edition of PAF—Festival of Film Animation is starting today on Thursday December 3rd in Olomouc. Opening night of the festival will see a string of exhibition openings - beginning with The Unbearable Lightness of Nyau Cinema by the Malawi-born artists Samson Kambalu in the U Mloka Gallery. His Nyau films break down the stereotype of temporal and spatial experience with film: they intentionally move away from the western perception of time and deviate from the linearity of contemporary narrative film. This is the first exhibition of Samson Kambalu in the Czech Republic.

Following is the opening in the Vitrine Deniska at 6pm, where the winner of Other Visions 2010  David Možný presents his project Open Space. Later at 7pm, opening of the Other Visions 2015 exhibition Differentiated Visions will start in the Atrium of Konvikt.

Later in the evening a vernissage walk will take place in the attic of Konvikt. The walk will include the following installations: Alexander Campaz: Infinity + 1, Jonathan Monaghan: Escape Pod, Marq Delong & Anna Slama: SANDBOX FRONTEX LITANY and PAFScreenSaver: Animation beyond Animation. The latter will take place in the exhibition space on the computer screens in the festival press centre.

At 7pm the essential event of the daily programme will follow - The Artist Has a Price 2015: Award from Vladimír Havlík will be awarded as a part of the PAF 2015 opening ceremony.

At 9 pm in the Film Auditorium, Pavel Ryška will introduce the family tree of the popular socialist TV  character through screening and lecture Mr. Egg’s Commercials. Mr. Egg, as he's been called then, first appeared on TV in 1967 to introduce commercial blocks.

You can also look forward to interesting screenings. At 10 pm in the Theatre hall a screening block AniScreen will begin that will offer a comparison of the foreign student animation work (Turku Arts Academy) with what is being produced on domestic art universities.

The Film Auditorium at midnight will offer the film Shirley: Visions of reality from the Austrian experimental film maker Gustav Deutsch. The film reflects the important historical events through emancipated actresses and their thoughts and emotions that are expressed by inner dialogues.

At 11 pm the Corpus Christi Chapel will become the scene of the performance of the Norwegian artist and musician Lars TCF Holdhus. His fascination with encryption and computer algorithms is reflected in the randomness of his works. The name of each of his tracks is a sequence of numbers and letters, just like the name of his PAF performance in Olomouc.

Ending of the programme will belong to Vladimír Havlík's musical-performative group from Olomouc Ostrý zub, that will perform in the Café Tungsram Transit. Following will be the éminence grise of the Prague's club and gallery scnee dzurillah. 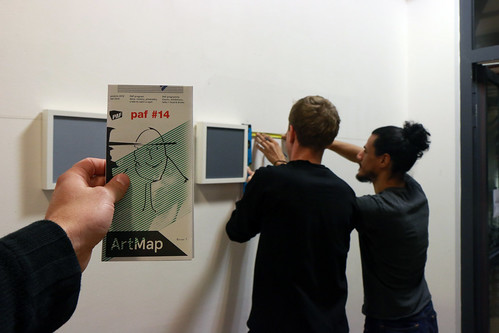