The Saturday programme will start at 9:30 am in the Film Auditorium with the five-episode series Garden that is based on the motives of the children’s book of the same name by the artist and illustrator Jiří Trnka. The magical illustrations from the mysterious world from behind the rusty gate were transformed into the series of short animated films by the director Břetislav Pojar, who is known for his animated series Hey, Mister, let’s play.

The backstage of the interactive exhibition Garden 2 will be introduced by the young artist and grandson of Jiří Trnka Matyáš Trnka in his presentation that begins at 11am in the Theatre.

To agitate, to experiment, to amuse is a screening block that will offer a series of films by the artist and director Zdeněk Miler from the 1960s, when Miler had been experimenting with the medium and his work also reflected the political system of the period. The screening starts at 11am in the

Saturday will also offer an interesting workshops. It will take place in the Atelier of Graphic Design at 11am and will be led by the Brooklyn fashion designer Alexander Campaz, who has been cooperating with PAF since 2012 and prepared this year's fashion collection PAF Fashion. He will talk about the methods of his creative work to the visitors of the workshop.

Unfortunately, the workshop with Edita Plicková was cancelled due to illness.

The American artist Jonathan Monaghan will introduce the presentation Architecture of Fantasy in the Theatre at 1pm. He will reveal his inspirational sources and work methods. The second screening of the experimental films of James and John Whitney will take place at 2:30 pm in the Film Auditorium. They will be introduced with the commentary of Martin Čihák.

Several lectures and presentations will take place during the rest of the afternoon. The lawyer with specialization on copyright issue in film Ivan David will talk about the impact of copyright on film making. This year he has published an acclaimed publication dealing with this matter. Tomáš Pospiszyl will introduce broader sources of the art genre of Laterna Magika. The musician Jonatán Pastričák and visual artist Ján Šicko have prepared a presentation about their new unique audio-visual project PLAIN. The movie Over Head and Ears in Moss will have its premiere in January. Detailed information including some extracts will be offered to the audience by its creators Filip Pošivač and Eva Kameníková.

At 5pm, the Corpus Christi Chapel will host a performative introduction of the film by the finalist of Other Visions David Helán  The Future Belongs to Helium.

Greg Pope, who has been continuously dealing with performative approaches in the field of live cinema, will introduce the presentation The Shadow Trap. He will be introducing his experimental films from 5:30pm in the Film Auditorium.

The Saturday programme will also offer the first round table discussion Distribution situation – the State of Things that will take place at 6pm in the Theatre. The guests of the discussion will be Martin Arnold (AT), Janek Rous (CZ), Samson Kambalu (MW/GB), Ivan David (CZ) and Lenka Střeláková (CZ).

The Malawian performer, situationist and writer Samson Kambalu will talk at 7:30 pm in the Film Auditorium about his work that is inspired by the specifics of African homeland and broad cultural knowledge. He will mainly focus on the concept of the short, spontaneous films Nyau Cinema. The screening block of films AniScreening of the MOME Budapest together with a selection from Czech schools will take place simultaneously in the Corpus Christi Chapel.

We invite you to the Congregation Hall at 7:30 pm to find out what is included in the first box of Svatopluk Pitra (graphic designer, illustrator and author of animated films) that was prepared for PAF in cooperation with Pavel Ryška and the studio Anymade.

The evening and night of the third festival day will again belong to AV performances, music and night screenings. The Theatre of Music will offer the AV performance of the Portuguese film-maker and visual artist Pedro Maia and the British musician Vessel from 9pm. The artist and musician Stanislav Abrahám will introduce his new album Shapescapes through the AV performance at 10:30 pm in the Theatre.

The screening block Socialistic Propaganda Leading to Bigger Consumer Culture begins at 8:30pm in the Congregation Hall. Following in the Film Auditorium at 10pm is the second part of the screening block Czechoslovak cartoon and puppet films today. The feature animated film Cafard by the director Jan Bultheel will be introduced two hours later again in the Film Auditorium.

The audio performance by Jonáš Gruska will be a part of the night programme. Saturday will be complete with a DJ set by the Slovakian futuristic selector duo Pjoni & Ink Midget. 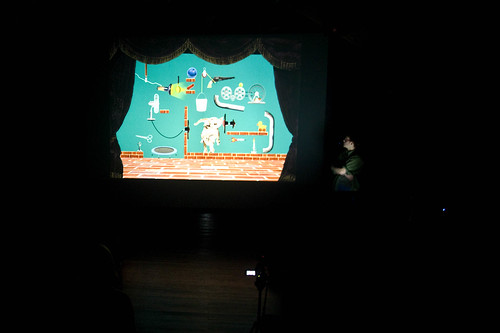