An authorial selection of films made in accordance with Nyau Cinema. In the same way as Nyau films communicate with their audience and challenge them to actively participate, their installations communicate with the specific space for which they are intended. Nyau films break down the stereotype of temporal and spatial experience with film: they intentionally move away from the western perception of time and deviate from the linearity of contemporary narrative film.

Part of the Festivals of Live Cinema project activities

The most famous art works by conceptual artist, writer and Situationist Samson Kambalu include Holly Ball (2000) – a soccer ball plastered with pages from the Bible which challenges the audience to “exercise and exorcise”. He is the author of his own religious philosophy – Hollybalism –, and Nyau Cinema – a special genre of film and site-specific performance, which comes from his experiences with the culture he was brought up in.  Based on Nyau philosophy, his interactive installation Sanguinetti Breakout Area was shown at the 2015 Venice Biennial and because of it he ended up in a trial.

The first exhibition by Samson Kambalu in the Czech Republic will take place in Gallery U Mloka and it will run until November 6, 2016. At PAF, Kambalu will introduce his work during the Saturday lecture, and will present his curatorial selection of videos made by others following the Ten Rules of Nyau Cinema. 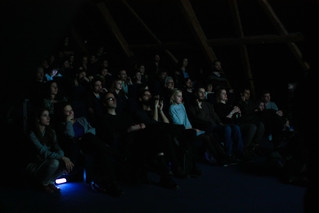 Part of the Festivals of Live Cinema project activities

Animation as the unifying principle of our experience within our perception of the moving image will be analysed through contemporary art, experimental film and undercurrents of cinematography. The programme offers presentations, screenings and a number of extraordinary performances on the boundary between live spatial animation, concert and 3D installation. A significant guest of the section is Malawi-born artist and filmmaker Samson Kambalu, who participated in the Venice Biennial 2015.